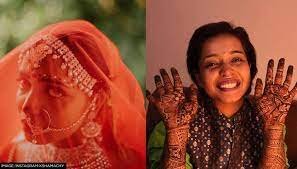 India’s first sologamy marriage ceremony was performed in Gujarat when Kshama Bindu performed marriage with self.

Kshama Bindu, 24, from Vadodara, Gujarat, tied the knotty knot with self which made her the first women to perform sologamy.

Kshami had earlier scheduled her wedding rituals on June 11, however got married three days before to avoid controversy.

The rituals of Haldi, mehendi took place on this occasion and she took ‘Phere’ alone and also performed sindoor ceremony on her own by standing in front of the mirror.

She put mangalsutra with her own hands as the chanting of shlock’s by pandit continued  on the mobile.

A few of her special friends attended the marriage of Kshama, who resided in Gotri area of ​​Vadodara. After marriage, Khamma has chosen Goa for honeymoon, where she will stay for two weeks.

Kshama has to say about this self-marriage, ‘I never wanted to get married, but wanted to be a bride. So I decided to marry myself. I am probably the first girl in my country to set an example of self-love.

Bindu works in a Pune based company in Vadodara. She has also done BA from MS University-Vadodara with Sociology as a subject.

After the wedding, she thanked everyone in a video message and said she was grateful for the support and encouragement. “I would like to thank everyone who has messaged me and congratulated me and gave me the power to fight for what I believed in,” she said on Facebook.