The significance of Karni Mata temple in Hinduism 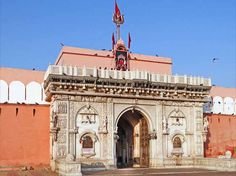 The auspicious Karni Mata temple is one of the most famous Hindu temples in India.

The temple is in the Bikaner district of Rajasthan. Goddess Karni Mata is worshipped in the temple. It is situated at Deshnok, 30 kilometers south of Bikaner. Karni Mata emerged in the Charan Kul. However, this temple is also known as the “temple of rats.” The darshan of the white Kaaba (rat) in the temple is considered auspicious and pure. This holy temple is home to approximately 25000 rats.

Some people visit the temple here, especially to see the beautiful marble carvings at the main entrance of the temple. The astonishing silver door, the gold umbrella, and the big silver dish are kept here for the offerings made for the rats (Kaaba). All of these are worth seeing after one pays a visit to the temple.

Devotees believe that Karni Devi is the incarnation of Maa Hinglaj Mata. There are many beliefs; one of them is that about six and a half hundred years ago, at the place where this grand temple is situated, the goddess used to worship her deity by living in a cave there. This cave is still located on the temple premises. After the Goddess’s Jyotirlinga, according to her wish, her idol was established in this cave. The idol in the Goddess’s own temple was made by a blind devotee, Khati. It is said that Bikaner and Jodhpur states were established with the blessings of Maa Karni.

The grandeur of the marble temple is a sight to watch. As soon as you cross the main door and reach the inside of the temple, you will be witnessing rats and their rat race. The number of rats can be estimated from the fact that to walk, one must keep dragging their feet on the ground rather than taking their next step. Thus, this is how people reach the front of the idol of Karni Maa while dragging their feet.

The rats are present throughout the entire temple premises. They are seen jumping over the bodies of devotees, but they do not harm anyone. To protect these rats from eagles, vultures, and other animals, there is a fine mesh on the open places in the temple.

Because of the presence of these rats, the temple of Maa Karni Devi is also known as the “temple of rats.” Hence, it is believed that if a devotee sees a white rat (Kaaba) here, it is considered very auspicious. The abundance of rats at the time of Mangala Aarti at 5 in the morning and Aarti at 7 in the evening is worth watching. Thus, one must visit the temple.